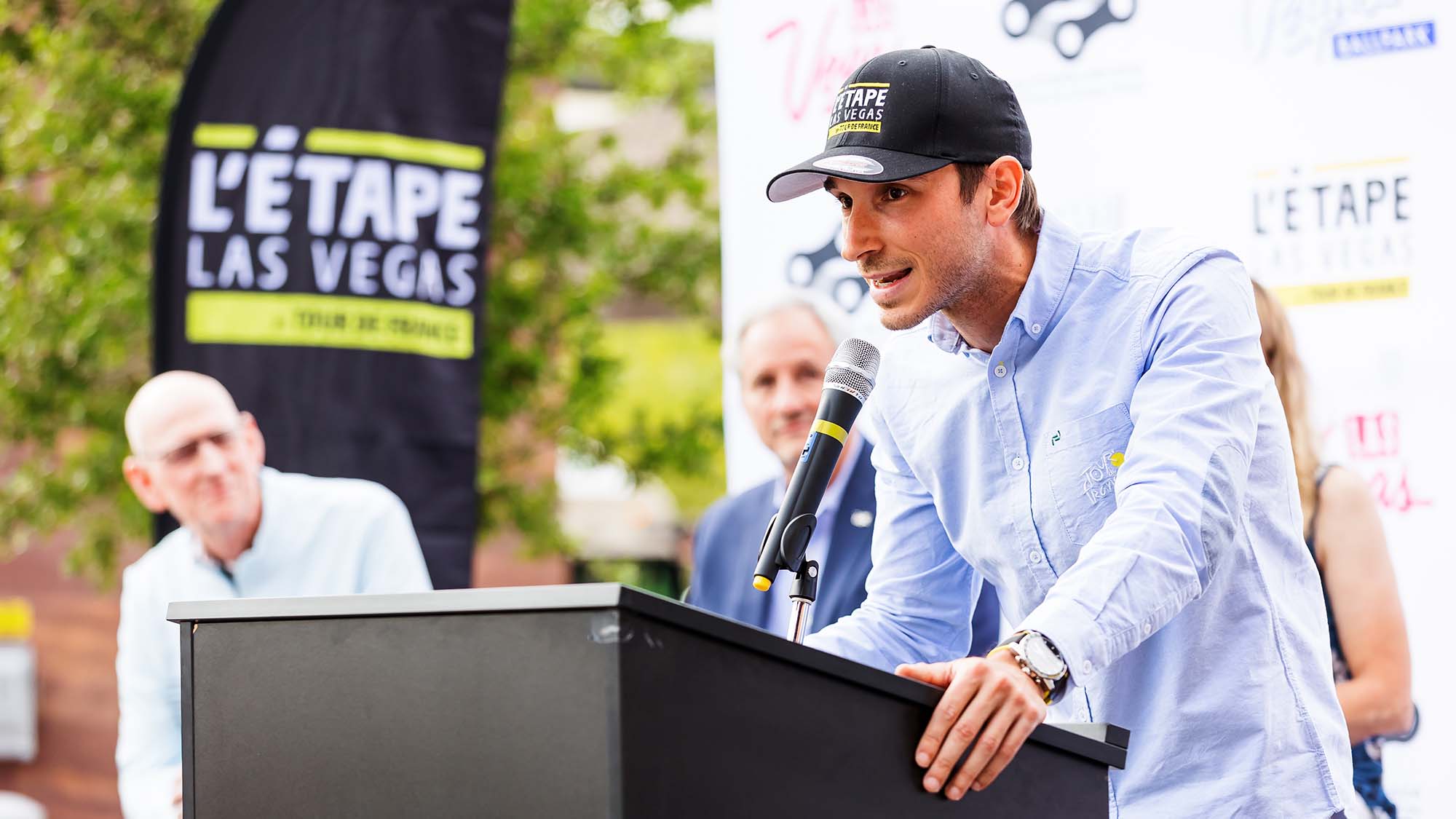 All routes will depart from the Las Vegas Ballpark and head west into Red Rock Canyon, with elevation of over +6,000 ft for riders opting for the 75-mile distance. Courses have been designed by Tour de France experts and course maps are available online at  lasvegas.letapebytourdefrance.com. There will also be a Family Ride (10-miles) and Kids Race.

The weekend-long event will include a fan fest at the Las Vegas Ballpark, patterned after the iconic Tour de France Village Départ. A Tour de France champion will also attend the event, ride the course with participants and share their Tour de France experiences at a ticketed Champions Dinner. (The Champion attending will be announced later this year).

Registration for L’Étape Las Vegas by Tour de France is open at  lasvegas.letapebytourdefrance.com.

“The first Tour de France was in 1903 and it grew to slowly but surely become the largest cycling event in the world, with an audience of 2 billion. And, here we are announcing the first-ever L’Étape Las Vegas. It’s a wonderful evolution to watch and we couldn’t be happier to expand the L’Étape by Tour de France series to Las Vegas.”—Umberto Paolo Mancini, A.S.O. and Tour de France representative

“We’re thrilled to welcome amateur cyclists from around the world to experience L’Étape Las Vegas by Tour de France in 2023. L’Étape by Tour de France has been a great partner in bringing this race to Las Vegas, and we’re confident both participants and spectators will be amazed by the natural beauty of Southern Nevada’s great outdoors. We look forward to sharing the many incredible experiences – from sports and entertainment to dining, spas and more – that make Las Vegas the Greatest Arena on Earth.”—Steve Hill, CEO and President of the Las Vegas Convention and Visitors Authority

“Las Vegas Ballpark at Downtown Summerlin is not only a top-notch ballpark, it’s also a great venue for special events of all kinds, including L’Etape Las Vegas by Tour de France. We look forward to welcoming cyclists from around the world, including our own local cycling community, for this unique event associated with the legendary Tour de France.”—Don Logan,  Las Vegas Aviators President & CEO

“L’Étape by Tour de France in Las Vegas will give cycling greater visibility with the general driving public. It’s a perfect opportunity for cycling curious people to participate in a new sport, while drawing attention to drivers to be cautious and aware when cyclists are present.”—Keely Brooks, Southern Nevada Bicycle Coalition

About L’Étape by Tour de France

About A.S.O.
With the Tour de France—one of the most popular international sporting events in the world—prestigious classics such as Paris- Roubaix, Liège-Bastogne-Liège, the Flèche Wallonne and Paris-Tours, as well as stage races such as Paris-Nice, the Critérium du Dauphiné and the Vuelta a España, A.S.O. is the world leader in bicycle race organisation with 100 days of competition each year. The globalization of cycling is one of its major areas of development. With the Saudi Tour, Deutschland Tour and the organization of the Arctic Race of Norway, A.S.O. continues to energetically contribute to the growth of cycling as an example of sustainable transportation for city centers.

The Las Vegas Convention and Visitors Authority (LVCVA) is charged with marketing Southern Nevada as a tourism and convention destination worldwide and with operating the 4.6 million square-foot Las Vegas Convention Center (LVCC). With 150,000 hotel rooms and 14 million square feet of meeting and exhibit space in Las Vegas alone, the LVCVA's mission centers on attracting leisure and business visitors to the area. The LVCVA also owns the Las Vegas Convention Center Loop, an underground tunnel designed by The Boring Company and the Las Vegas Monorail, an elevated 3.9-mile system with seven stops throughout the resort corridor. For more information, go to www.lvcva.com, www.visitlasvegas.com or www.vegasmeansbusiness.com.

Southern Nevada Bicycle Coalition is a 501(c)(3) whose mission is to create safer roadways, better trails, and more biking opportunities in Southern Nevada. They achieve this through education campaigns, community engagement, advocating for more bike infrastructure with local jurisdictions and partnering with local police on law enforcement events. For more information, please visit www.snvbc.org or connect on Facebook.

Las Vegas Ballpark®, located on eight acres in Downtown Summerlin® just south of City National Arena – practice facility for the Vegas Golden Knights, is the home of the Las Vegas Aviators®, the city's professional Triple-A baseball team of the Pacific Coast League (PCL) and affiliate of the Oakland Athletics. The team is wholly owned by The Howard Hughes Corporation®, developer of the award-winning master-planned community of Summerlin® and developer of Las Vegas Ballpark. With a wide range of seating options including 22 suites, club seats, berm seating, party zones and decks, picnic tables, kids' zone, bars and a pool beyond the outfield wall, Las Vegas Ballpark boasts a capacity of 10,000. Designed to host a variety of events in addition to baseball, the site is landscaped to complement the surrounding master planned community. The site is easily accessed from all regions of the valley via the 215 Beltway.  For more on Las Vegas Ballpark, visit www.thelvballpark.com.